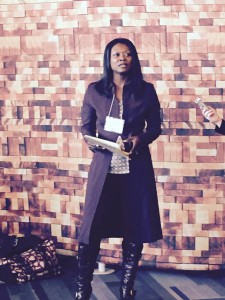 Motivated by the belief that #BlackLivesMatter, a diverse group of scholar-activists began organizing a solidarity action that would take place during the 2015 MLA convention in Vancouver. From the start, I knew about these efforts and knew that the organizers were inviting anyone and everyone to help plan. As a result, the organizers were NOT working with people they knew; they were literally taking every bit of help they could get. Initially, the idea was to replicate the “die-in” actions that have taken place throughout the country, including those that highlight professional affiliations, such as the medical students and professors who did die-ins in their white coats.

This idea felt powerful to me because it would acknowledge what was going on and would not allow for business as usual at #MLA15. Still, I kept my distance from the #Ferguson2MLA organizing efforts out of a combination of emotional exhaustion and keen awareness of the number of tasks already on my list. Who among us isn’t overworked? I had just survived one of my most difficult teaching semesters simply based on course content and its relation to ongoing anti-black violence, and this was a semester during which I traveled six times, had minor surgery, and chaired a committee to identify the best essay published the previous year by a key journal in my field.

Nevertheless, when asked to speak, I didn’t feel that I should decline. I agreed…but I soon wrote to the organizers and said I would not speak. I’m not generally a flake, so I began to ask myself some serious questions about my distance from this event.

I knew it wasn’t that I felt uncomfortable because I am Black but had not originated the idea. I refuse to be seduced by the notion that I should be a superwoman; I don’t try to do everything, so I appreciated that others cared enough to take this kind of initiative. I didn’t need to lead these efforts in order for them to be valid.

So, what was my issue??? Finally, I realized that my stepping back was only the most recent example of my silencing myself. Since August, I had turned down every radio show invitation that had come my way. Though I had been using Facebook and Twitter to speak out, as I dodged deeper involvement with #Ferguson2MLA, I clearly needed to face the truth: My country has long been sending me a clear message about how little it values me and mine, and that message was having its intended effect.

Realizing my pattern of self-censorship, I reached out to the organizers and asked to be reinstated as a planned speaker. When that opportunity remained an option, I immediately knew what I would emphasize. I would say that I couldn’t have faced racism’s impact on me without being empowered by other people’s energy.

As I said at the event on Friday, January 9, 2015, “Violence is a performance of the denial of citizenship. It says, this can be done to you because I don’t have to care about your life and limb. Then, when violence becomes public, and the response is apathy or victim-blaming, the violence—both physical and discursive—becomes a public performance. The message is, this person, these people do not belong. They are not valued by, or valuable to, a collective that matters.”

Because the purpose of violence is to mark who belongs and who does not, violence is best understood as know-your-place aggression. The goal is to tell certain people that they should not feel secure in claiming space, even if they have done all the things that the nation claims to respect, such as work hard and achieve according to accepted rules and standards. Studying violence my entire adult life, there’s no question in my mind: the success of marginalized groups inspires aggression as often as praise. They don’t have to be criminals or do anything wrong to be attacked; their success is more often the “offense” that will make them a target.

In this light, it matters that I began crying while marching a couple months ago in a #BlackLivesMatter event in Columbus, Ohio, as soon as the chant became Whose streets? Our streets. I was struck by how little I felt that American streets are my streets. Everything that is happening is designed to show me that public space is not meant for me and mine.

Feeling this way during the march also underscored how crucial it was that people of all backgrounds were asserting that these are “our streets.” For me, this is a claim not of ownership but of belonging. It’s about asserting that there is a public collective, and I am part of it. That is, I belong in it; I am valued by it; I am valuable to it. At the same time, it also struck me that some in that crowd are affirmed every day in their value to many recognized collectives. To be blunt, most of my white brothers and sisters marching with me are not getting constant messages that public space is not their space. Still, as I participated in that embodied practice of belonging—which is exactly what that march was and what the #Ferguson2MLA solidarity action was—I couldn’t help but notice the energy and empowerment I gained from seeing and hearing and feeling people of all backgrounds prioritize the assertion of an our with their words and actions.

So, coalition helped to embolden me. Yes, we are hit in different ways and with different levels of intensity by the public performances that deny that we all belong, but let’s allow that fact to energize us. When I’ve been in retreat mode, Pranav Jani has been on full-blast; when he needed relief, Laura Goldblatt and Lenora Hanson were ready; when they needed rest, Roopika Risam and Adam Miyashiro were feeling refreshed; when they needed encouragement, Deborah McDowell and Houston Baker got involved. And on and on and on. In other words, our different levels of energy and our varying capacities to keep fighting may indeed result from the disparate impact of all these forms of violence, but we can make that our strength—the glue of a collective not bound by class status, employment status, sexuality, gender expression, race, ability, or nation. Indeed, it seems that this very possibility helped make space for Professor Amber Riaz to address the #Ferguson2MLA crowd as a “Pakistani Muslim mother,” despite the fear she very logically feels for herself and the men and children in her life.

Whoever we are and wherever we are, we can choose to insist, Whose space? Our space!

Did you participate in #Ferguson2MLA or did you simply hear about it??? Either way, what did it mean to you to know that this event happened? Please respond with your own “What #Ferguson2MLA Means to Me” in the comments section below. And/or feel free to respond with a 500- to 750-word post of your own. (You can email it to Koritha Mitchell at mitchell.717@osu.edu) Let’s keep the microphone-less open mic going!

17 replies on “What #Ferguson2MLA Means to Me”