It’s two months after the #Ferguson2MLA action in Vancouver on January 9, and I had planned to write this up a while ago following the wonderful posts of Koritha Mitchell and Amber Riaz. But it’s still worth reflecting on the lessons and powerful message of the action—which was far beyond anything the ad-hoc team of organizers could have imagined when we threw ourselves into the planning over social media and Skype sometime during finals and over the holidays.

I mean, did you see the videos of the nearly 200 people gathered for the teach-in/speak out, or the boisterous voices of the dozens and dozens who went through the convention center, up and down escalators, chanting and demonstrating? Can you imagine that we had a discussion beforehand as to whether or not to raise chants since at campus actions, let’s just say it, professors are often not the loudest and boldest participants?

That energy didn’t come from nowhere.  It came from the unity and conviction that was inspired by the feeling, permeating the entire crowd, that we will not be silent while atrocities are going on, while a movement is happening everywhere. And that we would bring that conviction in our own workspaces, and challenge the notion of “business as usual.”

I’ve got too much to say about this. I’m overwhelmed by all the good that happened. The goal was to use that event as way to inspire us as we went back to our cities and campuses—and that certainly happened for me, as I rejoined the #BlackLivesMatter organizing here in Columbus, Ohio.

So instead of further personal reflections, or details about the organizing process, or the challenges of multiracial organizing against anti-Black racism—all of which are worthwhile topics of discussion—I am writing out the speech I gave at the event, modified and cleaned up slightly for this medium.

Right outside this hall, as I was inviting people to come in, I was asked by an African American colleague: “Why is it that all of a sudden South Asians are interested in Black people?”

— Well, I understand why you might say that. We have anti-Black racism in our own community.  We sometimes think we’re white. We sometimes swallow the ‘model minority’ myth ourselves.

At the same time, I said

— I’m a socialist of color. There’s nowhere else for me to be. I identify because of my racial and ethnic identity, but I can’t be reduced to that. What’s in my head matters as much as who I am. And that means, right now, saying yes, #BlackLivesMatter. And here we are.

This exchange is definitely not representative of my experience in the movement. But it highlights what I want to say today about solidarity: that it’s hard, but it’s also necessary.

So, yes, I’m coming to you as a desi socialist.

I’m coming to you from Ohio—that contradictory state whose northern border is Canada but whose southern border is the former slave state of Kentucky. That is proud of the Underground Railroad, but was full of sundown towns where it was not safe to be dark after dark.

But today, the state of Ohio is alive with struggle.

Week in and week out, day in and day out, anti-racist activists are organizing, planning, drawing people in. This is led in our city by mostly young Black activists, often women, often queer—and I want to give them a shout-out.

What we’re seeing is just a whole lot of creativity and guts. Like the sit-in organized by the Ohio Student Association (OSA) at the Beavercreek police station to demand action against the murder of John Crawford organized by OSA. Like some of the biggest and most vibrant marches I’ve seen in the city, organized by queer POC leadership in the #Cbus2Ferguson group, leading hundreds to march through the streets to the police headquarters to demand change.

We’re also seeing teach-ins and study groups and organizing meetings—where professors and graduate students are also doing their part. The Department of Women’s, Gender and Sexuality Studies held an effective teach-in. Graduate students in African and African-American Studies have organized a network called Effective Steps to Resistance, bringing community and campus together. My group, the International Socialist Organization (ISO), has organized a 3-day study series on “Black Liberation and Socialism,” and is bringing trans activist and resistance fighter CeCe McDonald to campus.

In Columbus, as everywhere around the country, these actions have raised debates and questions. The one I want to focus on is: what is solidarity? How to build it? How to avoid the pitfalls that may come up?

In this forum I’d like to connect this to what Palestinian-American professor Edward Said called the “task of the intellectual.” The intellectual, Said wrote in Representations of the Intellectual, has an “obligation to fulfill…For the intellectual the task, I believe, is explicitly to universalize the crisis, to give greater human scope to what a particular race or nation suffered, to associate that experience with the sufferings of others.”

Solidarity as the task of the intellectual. What an interesting idea.

I’d like to make two points about this topic.

First, that solidarity is not easy.

The first step is that people not directly experiencing direct targeting need to actually care enough to think it’s worth their time.

And when they do, they may feel like putting themselves forward in place of those who are most directly impacted. This can lead to the opposite of the intent.

To paraphrase Said: one should never put solidarity before criticism. The way I take this is that just because we want to show unity, we should not refrain from raising questions or thinking critically.

Because of such issues, the suspicion that some folks feel towards “allies”—to use the conventional term—is real. How many people have paid lip service to fighting oppression but haven’t shown up, or have projected themselves over the movement? How many politicians and leaders have promised to deliver the goods and haven’t?

And yet, and this is the second point, solidarity is necessary.

It’s a must. It’s a responsibility. Imagine if only Black people were outraged today, and no one else showed up to #BlackLivesMatter events and actions? That itself would be an outrage, and a sign of very deep problems.

You know the feeling when you’re from a marginalized or oppressed group, and you are in a department meeting, and you realize that only you, once again, are the one who will raise the issue of racism or homophobia or diversity? And you do your job but you wonder what it’s going to take for basic notions of diversity and inclusion to go mainstream?

Solidarity means a firm conviction, and action supporting this, that: I have your back. I am here to support you. I am here in alliance with you to create a space for your voice and your suffering. And my liberation is tied in with yours.

Their side wants to divide and conquer. Our side needs to unite and pull together.

Their side wants to disqualify people from participating in the struggle using some narrow criteria of whose issue this is. Our side needs to assert and draw out—skillfully, respectfully, collectively—the links between different people and places and things.

When Martin Luther King, Jr. said “an injustice anywhere is a threat to justice everywhere,” he was specifically referring to the idea out there that he was not from Birmingham but from Atlanta, and was therefore an outsider. But this phrase has become a slogan because it applies to all the efforts to undermine solidarity, to portray some people as outsiders and others as insiders.

We need to take up tendencies within the movement and academia that use theories of difference not just to ask critical questions about unity, which is necessary, but to make unity impossible.

Because if the movement is right, if scholars are right, that this is not just about police incompetence or a few bad apples but this is systemic and institutional, then it’s going to take all of us to defeat white supremacy and anti-Black racism.

I want to push one step further. It’s not just an ethical or moral call. It’s for our own survival in a world in which the 99% are kept down while the coffers of the rich keep overflowing. Survival is at stake when the sheer racist brutality of the state against Black people and other POC, unleashed and made acceptable as it has been for hundreds of years, weakens our will to act as collectives, or to question state violence against the people at large.

The extreme oppression against, the targeting of, and the incarceration of Black people in the US is a central edifice of an increasingly unequal and undemocratic society. So people who are not Black, including ordinary white people, need to fight anti-Black racism for ourselves, in our own interest.

Frederick Douglass said, talking about white supremacy in the old South, that “they divided both to conquer each.” He said: “They are plundered by the same plunderers.”

Douglass knew very well that poor whites did not live in the same conditions as enslaved people. You didn’t have to tell him that! But he still saw white supremacy as a tool to divide and conquer both enslaved Blacks and poor whites. It was, objectively, a system used against both.

I want to end with a chant, and I request you to join in. It’s a chant that’s come from the final words of Eric Garner as he was choked to death by Brooklyn police. The chant is: “We can’t breathe.”

Now, this is exactly the kind of slogan and chant that raises debates about identity and authenticity. Can I say that if I’m not being targeted and can breathe? Who can use the slogan?

The organizers, in fact, removed the phrase “we can’t breathe” from our statement, just as we removed the plan for a die-in, in order to avoid division over debates about appropriation.

Be that as it may: I’m asking you to join me in the chant from the perspective of solidarity, even if you are not Black, or not a person of color. Join in to assert that we can’t breathe because we refuse to be silent. That we cannot live in such a society anymore. That we will not stand back. That we will be a force in our cities and campuses at this historic time. 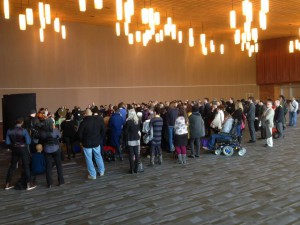 Well, I wasn’t sure what was going to happen. I was placed as the last speaker so that I could lead right into the chants—but would people feel moved enough and together enough to say those words?

It was amazing when they did.

We know very well that the Vancouver action was just one action. We know it didn’t, in and of itself, change policy or bring justice.

But the point of such actions is to bring people together, share our convictions, strengthen our resolve and, possibly, build a little shared sense of community and empowerment.

And #Ferguson2MLA did exactly that.

I would like to thank the 30-plus organizers who, in whatever way, contributed to making this action possible. Some of us took center-stage and leadership, but without your camaraderie and convictions, #Ferguson2MLA would have not happened. I won’t name names so as to avoid all of the issues that always come up around job status and identity and visibility. But you know who you are.

3 replies on “Reflections on Solidarity”