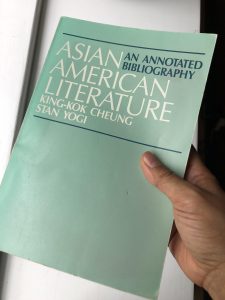 In 1988 the Modern Language Association published Asian American Literature: An Annotated Bibliography, edited by King-Kok Cheung and Stan Yogi. The book itself is fairly simple in design. My copy is a pale teal paperback, with the book’s title and editor names in all caps. The simplicity of the book as a physical object, however, belies its complexity–its importance as a scholarly contribution to Asian American literary studies, its ambitious scale (it includes close to 3400 entries, most of which are annotated, of Asian American literature and scholarship), and the hours of labor that led to its creation. Picking up this work today, I’m still impressed by Asian American Literature: An Annotated Bibliography as a trove of texts and valuable resource for scholars and students. I’m also, however, struck by its early anticipation of some of the key features of Asian Americanist scholarship over the course of the last three decades and moved by its testament to scholarly collaboration and persistence.

At MLA 2020, the group that is today known as the Committee on Literature of People of Color in the United States and Canada will celebrate its anniversary with a plenary and set of linked panels. We wanted to anticipate this more formal event through a reflection upon the committee’s work, including its promotion of scholarship by and about authors of color through publication. In addition to reviewing the annotated bibliography and its introduction, I also contacted the team that produced the book, Cheung, Yogi, and their then student assistant Brian Niiya, who all reflected upon the the process of its creation.

To revisit this bibliography and its creation is a humbling exercise, one that returns us to a model of literary archival work that we now take for granted. Asian American Literature: An Annotated Bibliography was the product of an extraordinary level of labor undertaken by an untenured assistant professor and students. Without the luxury of Google, not to mention the digitized print and periodical archives and databases that we currently use to find materials, Cheung, Yogi, and Niiya completed a monumental set of tasks: finding materials, collating and curating the list, and reading and annotating as much as possible for future scholars.

Asian American Literature: An Annotated Bibliography was early on capacious in its conceptualization of the field (see a similar assessment of the bibliography in Shirley Lim et. al., Transnational Asian American Literature, Sites and Transits, 5). The editors responded to and anticipated some of the signal critical flashpoints that would affect Asian American literary studies in the years to come: questions over what “counted” as Asian American literature, for example, or the turn to transnational, regional, and diasporic frameworks. Departing from the “sharp” distinctions made by Frank Chin et. al. in editing AIIIEEEEE! An Anthology of Asian American Writers, Cheung and Yogi instead decided to continue a trajectory crafted by Elaine Kim in Asian American Literature: An Introduction to the Writings and Their Social Contexts). The team chose inclusion over exclusion in the logic of selection, and they decided to incorporate overseas writers, “writers of Asian descent who have made the United States or Canada their home, regardless of where they were born, when they settled in North america, and how they interpret their experiences,” mixed-descent or mixed-heritage authors, and those who weren’t permanent residents but wrote about Asian experience in the US or Canada.

The volume’s definition of the category “literature” was similarly expansive, and the bibliography also included nonfiction, popular fiction, and essays. Cheung and Yogi recognize the political complexity of the term “Asian American” but underscore early on the heterogeneity and multiplicity (Lisa Lowe) that would later be recognized as critical to the field. “We try to enlarge the precincts of Asian American literature,” they contend, for “A narrow definition would stifle rather than inspire at a time when Asian American writers are still finding their voice, a voice that should be polyphonic.”

Reflecting upon the book’s origins, King-Kok Cheung locates the creation of the bibliography in the context of her own position as as a “self-conscious interloper” in a field that was still emerging in the 1980s (then an assistant professor at UCLA, Cheung’s dissertation research had focused on Macbeth, Doctor Faustus, and Paradise Lost. Even though her tenure mentor at UCLA, the late Don Nakashani, urged her to proceed with caution, Cheung was persistent. Today, she observes, that even though “the bibliography indeed counted very little in terms of my academic promotion (it was Articulate Silences that sealed my tenure [case]),” she nevertheless “considered the bibliography to be the best work I/we have done for the field personally.”

According to Cheung, then-students Stan Yogi and Brian Niiya “devoted hours to this project not for the RA pittance but out of deep concern and commitment to the field. There was not a single phantom item in the bibliography. Stan and Brian traced and located everything listed (long before the luxury of Google). Among the three of us we tried to read and annotate as many items as possible. We worked in Campbell Hall during many a holiday (e.g. Thanksgiving and Christmas), sometimes till midnight.”

Yogi also has “very fond memories of working late into evenings and on weekends” at Campbell Hall. He recalls using “the Center’s then state of the art desktop, a behemoth of a computer.” The group “stored information on 8″x8″ floppy disks.” Yogi describes the process of research as one that was, in the end, inspiring in part because it became a deeply personal experience:

“I recall the joy of discovering and reading work that was new to me–whether from decades earlier or more recent– and getting goosebumps when we learned of Asian American authors about whom we previously knew nothing. I was especially excited to read stories and essays that Japanese American newspapers published in the decades following World War II. Brian painstakingly printed those works from microfilm and then cut and pasted them onto 8 1/2 x 11 sheets. (I still have them!) Those pieces, by Hisaye Yamamoto, Wakako Yamauchi, and others I had never heard of before, gave me insights into my family and community.”

Despite the late nights and long hours, according to Niiya, the task “never felt like a burden given that we all believed in the project and that King-Kok and Stan managed to be unfailingly pleasant to work with and for. It was eye opening to see just how much literature there was, particularly in newspapers and other publications that emanated from Asian American communities.”

When I first encountered Asian American Literature: An Annotated Bibliography, I was a graduate student about to begin a project on early twentieth-century Filipino American literature. In the pages of the bibliography, I encountered names of writers from the Philippines who published in the United States and the Philippines. The bibliography was critical to this early research, but more importantly, the volume offered–and still offers today–a model of scholarship that early on characterized Asian American literature and its expansive future. Today it sits on my bookshelf alongside several linear feet of novels, collections of poetry and short stories, memoirs and nonfiction, scholarly monographs and edited collections–all produced by Asian American authors. Asian American Literature: An Annotated Bibliography is a reminder of this past, present, and future, even as it marks the effort and labor that carved out a space for this work. Or, as Niiya recalls, “even with all that there was, it was hard to imagine how much more there would be to come in the years since then.”

0 replies on “On Cheung and Yogi, Asian American Literature: An Annotated Bibliography by Denise Cruz”